Mumbai local trains running on direct current (DC) power will become history on Indian Railways main line next week after 90 years.
The dust brown and yellow trains have been a Mumbai trademark all these years. The Bombay Railway History Group has been appealing to the railway authorities to save, if possible, a working model of Direct Current train as the technology will cease to exist on Indian Railways, but authorities do not seem too keen. While there have been promises to save a shell of the motor coach at museums, we thought a working model of the fading technology would have been wonderful.

During the last few decades, there were attempts too with amateur rail fans identifying a place near old Mankhurd railway station in Mumbai where short runs of such DC runs could be done, away from active service line, but nothing ever materialized. Such runs of course would involve cost and manpower to keep them operational. 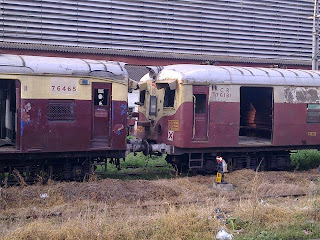 Only 36 pure DC Electric Multiple Unit trains (26 9-car and ten 12-car) remain on harbour and trans harbour, which too will also b slowly converted, retrofitted into AC-DC.

All the locos have already been converted and no single pure DC loco remains today.
Read my report here
http://www.mumbaimirror.com/mumbai/others/DC-trains-will-cease-to-operate-on-Main-Line-from-May-23/articleshow/47312559.cms
Posted by TWJ Team 1 comment:

The Legend of Indian Rail Lines

The Legend of Indian Rail Lines
By Ganpat Teli

‘Halt Station India: The Dramatic Tale of the Nation’s First Rail Lines’ by Rajendra B. Aklekar, Rupa Books, Delhi, 2014.
Sometimes when we travel in the trains, we usually think of how the railway made its ways in India? What was the story of the first rail line of the country? How the project was made and it progressed? What were the challenges before the mission of laying lines? What were the reactions of local people towards this strange happening? How this network of track spread all around the country. The answers of some of these various questions is ‘Halt Station India: The Dramatic Tale of the Nation’s First Rail Lines’ by Rajendra B. Aklekar. As railways enthuse, he narrated the story of advent and development of rail lines particularly in Bombay in this book. Sir Mark Tully rightly appreciated the book in the forewords that “Rajendra B. Aklekar’s meticulous research- and his scholarship which enables him to interpret his finding- throws new light on the way those railways were built- the laying of the lines, why they were laid where they were laid, how the demands on them changed and how they met those demands.” He collected facts from various sources and created this wonderful book by putting them together.
The first Chapter ‘The Story of an Experimental line’ of the book is an account of emergence and materialization of the idea of first rail line (not only) in India (but also in Asia). Though the activities related to the steam engines were taking place in India even before 1850 when architect of the first line of India James John Berkley landed in Bombay but the first formal passenger train service was flagged off on 16th April 1853 from Bori Bandar (known as VT) to Thana hauled by Falkland (the locomotive named after Bombay governor of the time Lucius Bentinck Cary, the tenth Lord Viscount of Falkland). Some other engineers also joined Berkley’s team at the site but couldn’t acclimatize with the weather condition and even succumbed to the death. The construction of the line was really a big challenge in a difficult terrain. 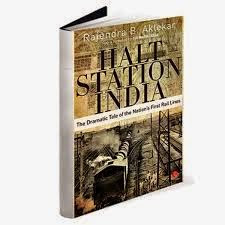 Aklekar noted down all the activities related to the construction of the first line, such as survey of the line, arrangement of construction materials, planning of line, arrival of locomotive and coaches, trial run, enthusiasm of locals and railway workers and finally the description of the first run. Apart from these details, Akelkar also noted socio-economic aspect of this development. There was not a very good relationship between English and local workers. Local workers were also on strikes with their demands. When trains were started running there were many reservations among the people of upper social strata. Rich and people belongs to the upper castes (both Hindus and Muslims) were not happy to share their space with the common people.

Next Three chapters of the book ‘Walking down the first Railway Line’, ‘The Romance of the Harbour line’ and ‘The Wonders of BB&CI Railway line’ are interesting reportage of tracking along the lines. Akelkar described the specifications of the station one by one and also traced the remains of the day. He thoroughly enjoyed the art of narration while telling the stories of the lines and stations. Line and Stations between Victoria Terminus and Thana have been gone through the winds of change but remains of Great Indian Peninsula Railways (now central line) are still there. Similarly he also journeyed the lines of Bombay, Baroda and Central India Railway (Now Western Line) and Harbour line.
Fifth chapter of the book ‘Nostalgia Along the Lines’ is an collection of the memoirs by the people of the early days of railways in Bombay. Next chapter, ‘Forgotten Lines and Lost Journeys’ is focused on the important lines and stations which don’t exist now. Bori Bunder, from where the first train of India originated is more or less existing in the name of UNESCO world heritage site Chatrapati Shivaji Terminus and known as Victoria Terminus but Colaba, Bombay Backbay, Ballard Pier Mole, Mazgaon and Bhor Ghat Reversing stations are now became chapters of the History. Similarly Trams Services and some Industrial lines disappeared in the crowd of the cities. Author of the book devoted one separate chapter on the tram services in Mumbai. In the last part of the book he covered all the recent developments related to the railways in Mumbai, introduction of trains with new technology, mono rail and metro.
Railway is a passion for Rajendra Aklekar and the same is reflected in this book. He narrated the story in a floury language. He is a well informed writer, he has every possible facts related to the particular person, event or item. For example he shows how the root of Musjid Bunder station connected with Tipu Sultan, the ballot boxes of first General Election of the India carried by railway from Mumbai to all over India and how the hall was cooled during annual session of Indian National Congress. Author also uncovered reason behind the naming of station as ‘road’. During the epidemic Britishers didn’t want to come in touch with local people so the rail lines were kept outside of the town and nearby station was named after the same town as road. Aklekar also provided old photographs of the various stations and lines. The book is a combination of a scholarship and fiction. On the one hand, he used various references from books, newspaper archives and journals; on the other side he has mastered the art of storytelling.

The Coupon Validating Machines (CVMs) installed and developed 21 years ago by the Railways, as an alternate to the then ticketing system, will be going down the memory lane from 1stof May 2015. The Coupon Validating Machines (CVMs) also synonymous as the"Red Boxes" will be a matter of reminiscence, as the Railways has bid farewell to it once and forever. 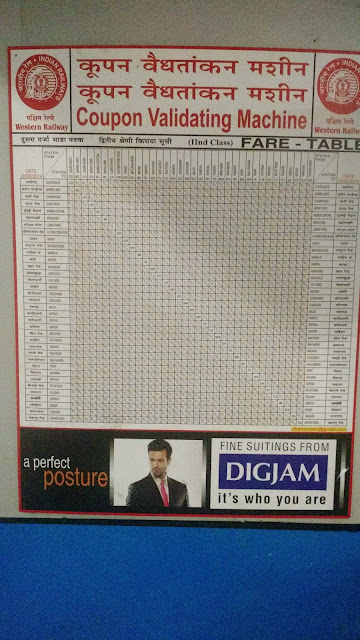 The Coupon Validating Machines (CVMs) and its Coupons were introduced in the Mumbai suburban section of W. Rlys on 15/08/1994. The basic idea behind the introduction of Coupon Validating Machines was to bring down the length of queues at the booking counters and to reduce the time taken for purchasing tickets. The commuter was required to purchase the coupon booklet available from the booking counters and punch the coupons of the appropriate ticket value at the machines installed at the stations, which print the station code of validation, date and time of validation, to undertake the journey on the Western as well as the Central Railway suburban trains. The coupon booklets were initially available with the denominations of Rs. 40 /- & Rs. 60/-, which was later increased to Rs. 50/- and Rs. 100/-. There were a total of 306 nos. of Coupon Validating Machines (CVMs) on the Western line for the convenience of the commuters.
It is worth mentioning that true to its concept, the Coupon Validating Machines was an instant hit among the general commuters, especially, for the occasional travelling masses, thus gaining momentum to its popularity. The average sale of coupon booklets was approx. 20,000 per day and used by approximately 1.70 lakh passengers daily, which amounted to 15% share of the total daily travelling traffic. 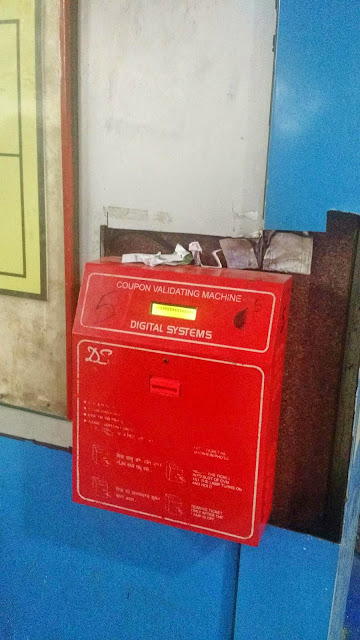 The Ministry of Railways has discontinued the Coupon Validating Machine (CVM) Coupons with effect from 1st April 2015 and accordingly, the sale of CVM coupons had been discontinued w.e.f. 01/04/2015. However, the CVM coupons available with the commuters were permitted to be continued upto 30.04.2015 by stamping on the coupons.

Now, these Coupon Validating Machines (CVMs) and the coupon booklets are set to enter into the annals of Railway history as the same has been discontinued to make way for the more technologically advanced ticketing system of Automated Ticket Vending Machines (ATVM) and Mobile Ticketing. They are retired from Railway service and will find its place in the archives after the completion of its final innings on 30th April, 2015. 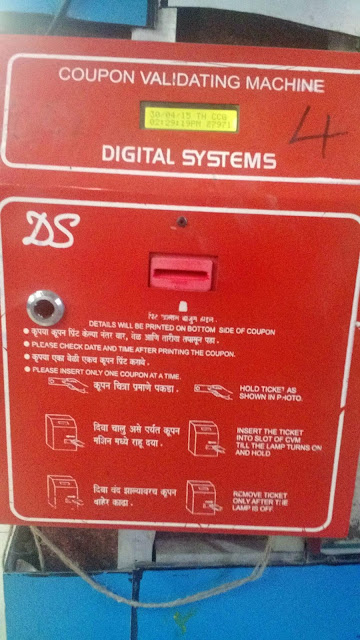 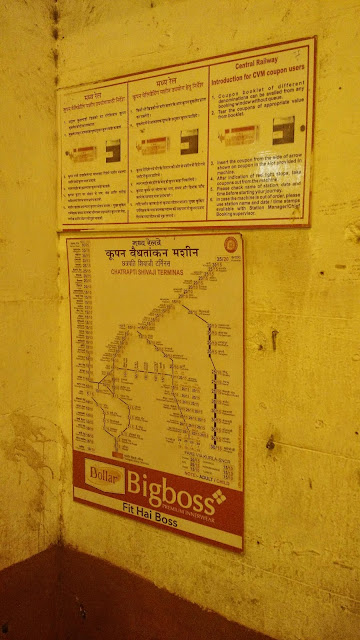 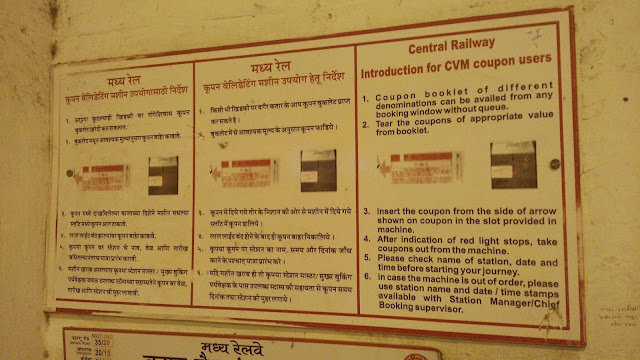 Story of the railway turntable 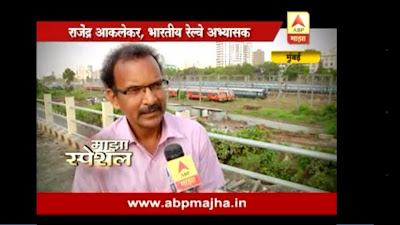