A discovery of an 117-year-old stone at Thane railway station in Mumbai on Central Railway recently has evoked memories of how this railway station played host to the continent's first railway train that ran in 1853 between Boree Bunder (today's Mumbai CST) and Thane. I noticed the stone a few months ago lying in the station premise.

The stone with engravings '1899' found at the station while digging for construction of a public utility has reiterated the importance and historic place of Thane in the history of Indian Railways. Thane station deserves a special place in Indian Railways’ history books. Today, the station seems to have got lost in the crowd, traffic and a maze of pedestrian and vehicular bridges, and escalators (the one at Thane was the first on Mumbai railway), but here goes the story of how it was the first terminus. 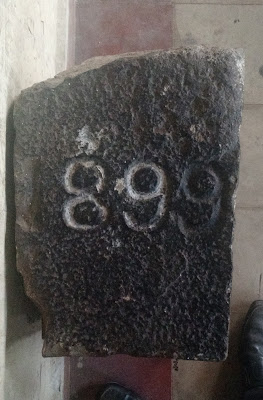 Said to have been built on the site of the old Gamdevi temple that is now in the east, the first railway tracks were laid such as they entered Thane’s koliwada, the fishing village, to split it into two –east and west. Near the station today, the area is still called koliwada, but the sea is now much far behind and fishing is hardly the main occupation here.

When the first train arrived, there were durbar tents and delicacies waiting for the passengers of the first train on open grounds. Once the railway started regular runs, there was need to upgrade the station.

Additional land of about four acres had been acquired for the station. Of the total land, about 3 acres was owned by about 30 residents and the GIP Railway Company acquired it at a cost of Rs 1,000 per acre for agricultural land and Rs 500 per acre barren one. The acquisition was complete by 1891. A bigger station was soon built in those days of steam engines. The first electric local train did not come to Thane before December 1926. Nevertheless, today, Thane is a ten-platform station premise, always busy and crowded.

Speaking on the stone, while a few local officials said that recently when the foundations of one of the new bridges were being laid, contractors and workers stumbled upon this stone (about 1.5 feet in height and less than a feet in width) with markings 1899 and that the presence of mind by station officials saved the historic stone, a few others said that the stone has been lying in the station premise for quite some time. Whatever be the story, it is a fact that this stone with its engravings is from the old building structure when the station was first rebuilt and upgraded in the late 1890s.

Local CR officials said it is now being preserved. In fact, the existing platform two of the station had an old stone building that was recently partially renovated when the new bridges were being built. The stone could have been from the foundations of one of these old walls, which were a part of the original structure. 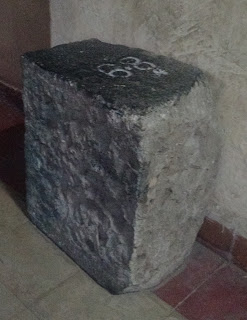 While local railway officials said they were not of the exact details, city historians said it could be an important piece of history given the fact that Thane was a part of India's first railway line that was opened 46 years earlier in 1853. "It is indeed a rare find and such things always add to the glory of history of railways. The stone should be shifted to the railways' heritage gallery," Deepak Rao said.

The Central Railway in fact does plans to move this stone to the heritage gallery at Mumbai CST at a later date where all such relics have been gathered.

A set of old salt department sidings once bifurcated from Thane station in the east to reach an old jetty that still exists. The place today is a small promenade. The remains of the single line sidings and the path of permanent way can still be traced under a new sky-walk and a road divider today along what was then called the Mithbandar Road and now named Rambhau Mhalgi Road.

The path ends at an old cargo shed along the former jetty. When documented in 2010, the old wooden cargo shed with worth a view with remains of an iron weighing scale and cobblestone flooring, but today, the worn out shed has collapsed and forgotten like the city’s railway history and old lines.

Rajendra B. Aklekar
Posted by TWJ Team No comments: