So with the Maharashtra government now deciding to name the proposed Oshiwara station between Jogeshwari and Goregaon on Churchgate-Virar section of Mumbai division of Western Railway as Ram Mandir, Mumbai suburban railway, the city’s lifeline, has now become a completely secular railway and come a full circle.

Controversies apart, and I do not have any political views, but lightly speaking it now has a Churchgate, a Masjid Bunder, a Guru Tegh Bahadur Nagar and now a Ram Mandir. :) 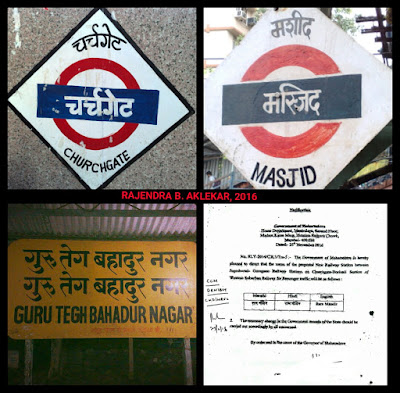 Let’s look at their brief history.

Churchgate: Mumbai (today’s south Mumbai) was a walled, fortified city with moats. The fortification had three main gates. And one of the gates was an entry to the St. Thomas Church, today’s St Thomas Cathedral. The road was named Churchgate as the road from led to this church. This gate, which roughly stood where today’s Flora Fountain stands, was demolished in 1860. The railway station that came up near the gate’s proximity on the Bombay, Baroda and Central India line (today’s Western Railway) was named Churchgate.

Masjid Bunder: Named after an old jetty which was near a mosque (masjid), this station on Central Railway Mumbai comes just after the iconic Mumbai CST. Records suggest the station probably got its name from the 200-year old Gate of Mercy Synagogue, called Juni Masjid, along Samuel Street in Mandvi in the east of the station, one of Mumbai’s oldest synagogues. Another one Saat-Taad mosque, simply translated “seven palm trees” is located just next to the station today hidden amid a maze of warehouses and wholesale dealers with a narrow entrance today
.
Guru Tegh Bahadur Nagar: Originally called Koliwada, this station on the harbour line of Central Railway Mumbai was renamed Guru Tegh Bahadur Nagar after the ninth of the ten Gurus of Sikhism in July 1979.

Ram Mandir: The proposed Oshiwara station had been under construction for quite some time. Political parties demanded that the station be renamed as Ram Mandir station in recognition of a popular temple in the area. The road that leads to the station is called Ram Mandir Road. Today, the Maharashtra government approved the proposal. 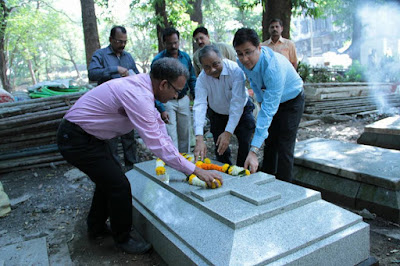 Started the day (November 11, 2016) by paying homage to Frederick William Stevens on his 169th birth anniversary at his grave in the Sewri Cemetery along with Central Railway delegation. '

The architect has not just designed the wonderful Victoria Terminus -- Mumbai CST heritage building, but also the Mumbai Municipal Corporation head office, Churchgate heritage building, what is now the Maharashtra Police head office building opposite Regal Cinema, the artistic water fountain opposite GPO and much more, all major icons of South Mumbai. 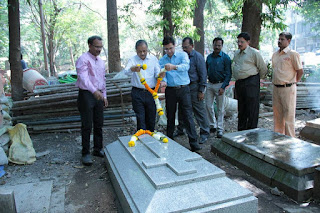 A salute and a happy birthday. 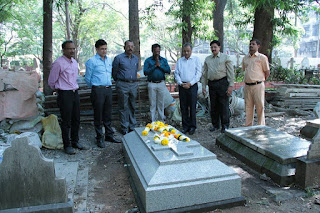 An official event was also been organised on the occasion this evening in the prestigious dining hall of Mumbai CST station.


Posted by Rajendra B. Aklekar No comments: Links to this post