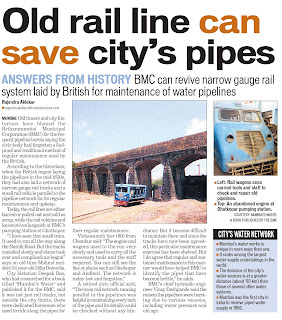 OLD timers and city historians are blaming Mumbai’s municipal corporation for the frequent breaking of pipelines saying that the corporation had forgotten one of its fool-proof and traditional methods of regular maintenance started by the British.

Recalling that when the British begun laying the pipelines in the mid-1850s, they had also laid a network of narrow gauge rail tracks and a small rail vehicle parallel to the pipeline network for its regular maintenance and upkeep.

Today, the rail lines are either buried or pulled out and sold as scrap and the rail vehicles and locomotives languish at BMC’s pumping station at Ghatkopar in north-east Mumbai.

Mumbai’s water works is unique in more ways than one. It ranks among the largest water supply undertakings in the world and its sources are at a greater distance (about 110km) than those of many water systems. Mumbai was the first city in India to receive piped water supply in 1860.